The Ontario Scholastic Basketball Association (OSBA) is excited to announce the upcoming 2019 OSBA Men’s and Women’s Final 8 Championship series will be played in Toronto at Ryerson’s Mattamy Athletic Centre from March 7th to 10th. 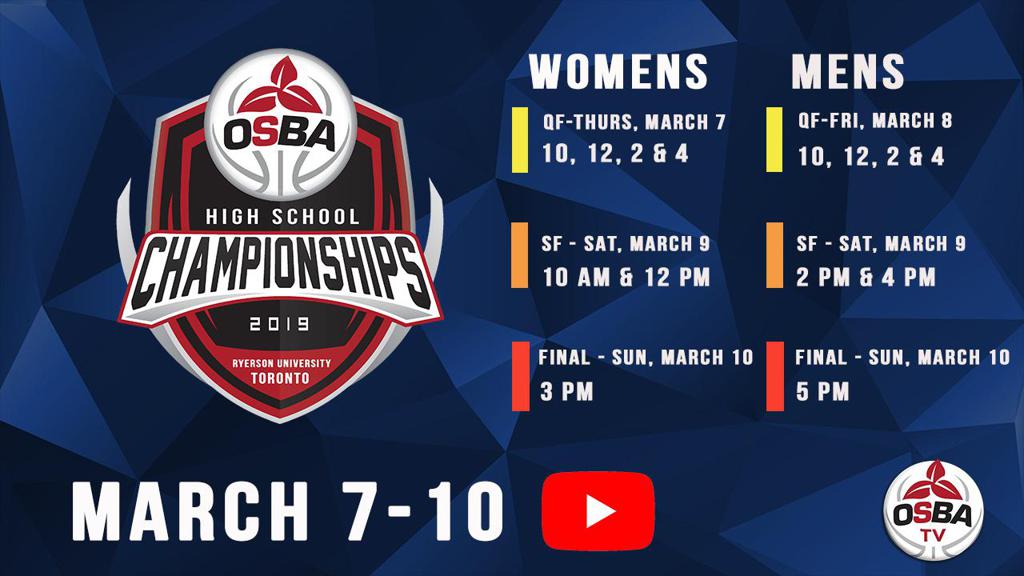 The Ontario Scholastic Basketball Association (OSBA) is excited to announce the upcoming 2019 OSBA Men’s and Women’s Final 8 Championship series will be played in Toronto at Ryerson’s Mattamy Athletic Centre from March 7th to 10th.

All games will be streamed live on ontariosba.ca/osbatv

The premier event showcasing the top high-school aged talent in Canada will run concurrently with the 2019 U SPORTS Women’s National Basketball Championship, also taking place at Ryerson during Championship weekend.

It’s a partnership that will allow fans of elite amateur basketball to enjoy both the best high school and university level talent all in one location, and encourages shared support between the female basketball players at both levels.

“Ontario Basketball is thrilled to bring the OSBA Final 8 to Ryerson this year,” said Jason Jansson, executive director of Ontario Basketball. “These athletes are truly elite competitors and we encourage everybody to come see Canada’s top prep players before they take their talents to USPORTS or the NCAA.”

“We are very excited to be hosting the OSBA Final 8 playoffs in conjunction with our 2019 U SPORTS Women’s National Basketball Championship,” said Carly Clarke, head coach of Ryerson Rams women’s basketball. “Bringing top high school basketball to our building, along side the best university basketball teams, will create a jam-packed basketball weekend for all fans, with the opportunity take it all in!”

Teams competing in the OSBA will continue their regular season schedules with playoff seeding on the line. The top teams in each Men’s and Women’s divisions receive a bye into the Final 8 with the other teams competing in play-in games for the chance to play in the Championships. Please see the official schedule format for the 2019 OSBA Final 8 Championships below.

For tickets to the USports Final 8 Women’s Basketball Championship use promo code OSBA.