Being one of the best high school players in the world has earned her a spot on rosters at all levels already – meet Aaliyah Edwards.

Ahead of her time, the 6’3 forward from Kingston, Ontario has represented Crestwood Prep in the OSBA, as well as Team Ontario at National Championships, and has now suited up numerous times for Team Canada over the past three years.

Aaliyah won gold and tournament MVP with Team Ontario in 2017 at the U15 Girls National Championships but she didn’t stop there – playing her first games with Team Canada at the U16 FIBA Women’s Americas Championship in Argentina. During that tournament she averaged 8.4 points per game, 5.4 rebounds and 1.6 assists en route to a silver medal.

That was just the start of her Team Canada contributions. Aaliyah won a silver medal during the 2019 FIBA Women’s AmeriCup and immediately travelled with the senior women’s team to play in the FIBA Olympic Prequalifying Tournament where Canada won all of their games and she got guidance from one her idols in Miranda Ayim. 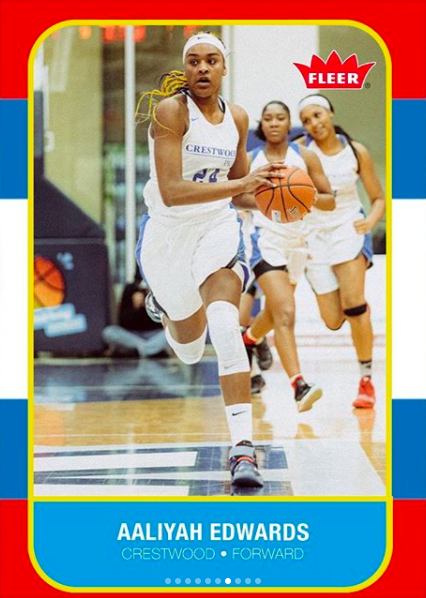 “Playing with the senior women’s national team was an amazing experience down in Puerto Rico,” Aaliyah said of her play at the FIBA AmeriCup. “It’s the same basketball just at a different level. I’m just grateful for that experience, I learned a lot. The girls there are very welcoming – ballers respect ballers – so I felt very comfortable in that atmosphere.”

All of Aaliyah’s experience at the international level has affected her mindset and style when she suits back up with her high school squad in the OSBA.

“Playing at the international level, something that I can bring to the OSBA is just more intensity. My knowledge has grown while spending the month with the Senior Women’s team. Bringing that back to the team, implementing that in practice, my leadership and getting everyone on the same mentality that I learned and the competitive drive.”

Aaliyah helped lead Crestwood to an undefeated season in 2018-2019 averaging 16.9 points per game, 10.3 rebounds, 2 assists and 2.4 steals while shooting 50% from the field. She’s helped the Lions continue that streak this season undefeated thus far.

Aaliyah has competed on almost every level she can and once the OSBA season finishes she will be heading to the University of Connecticut to join head coach Geno Auriemma and the Huskies storied program. She will be joining top recruit Paige Bueckers and the Huskies stellar recruiting class and look to continue her success on the next level.